OK
Tomburn Ltd uses cookies. Some may have been set already.
You are Here: Home / Case Studies / Case study: Princess Juliana Airport
Best value and service in finishing for all our customers

The Princess Juliana Airport project is a multimillion-dollar improvement plan to meet growth demands for the second busiest airport in the Caribbean.

Phase one  of the project (1997-2001), concentrated on upgrading existing facilities and improving the level of service at various points.

The second phase (2003-2008) entailed the construction of a new terminal building (27,000m2), the re-routing of the airport road around this facility, a new radar and ATC tower, and additional aircraft and vehicle parking capacity.

LBL Finishers were the exclusive PVDF applicator for Phase II, and work coated for the $87 million, brand new state-of-the-art passenger terminal building, including the finishing of bull nosing, panelling and extrusion in a Duranar White & Grey. The terminal, capable of handling 2.5 million passengers per year, opened in October 2006. 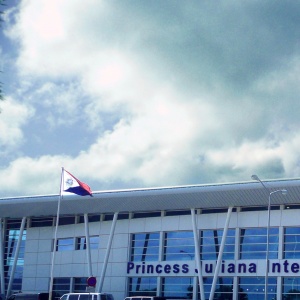 "Best value and service in finishing for all our customers"